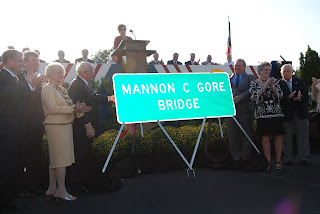 The Town of Sunset Beach joined with the N.C. Department of Transportation on Friday October 1st to dedicate the new bridge from the mainland to the island of Sunset Beach.
The bridge has been named for Mannon Gore, the original developer of the island. His son Ed Gore unveiled the new sign after speaking for the family at the event. Over 300 attended the event at the mainland base of the new bridge. A reception followed at Sea Trail.
The bridge is scheduled to be open to traffic later this month.
Shown in the photo from left: Congressman Mike McIntyre, DOT Board Member Michael Alford, Diane Gore, Ed Gore, DOT Secretary Eugene Conti, and other Gore family members.