Posted On Friday, August 17, 2012
Thanks to a group of town merchants, the free Sunset Beach Concert Series at Village Park was held again this summer after a couple years off. Sunset Properties was proud to help sponsor the weekly events held each Wednesday night starting at 6:30 pm on the mainland just a mile or so from the island's bridge.

Attendance grew steadily through the summer, as both vacationers and town residents brought their chairs or blankets to listen to the variety of bands that were scheduled.  By the end of the summer, plenty of dancing was taking place as the crowd loosened up a bit!

This year's concert schedule will continue through the 29th of August, and then will resume next June.  If you'll be at the island over the next two weeks, come join the fun.

As a reminder, Sunset Properties is also a sponsor of the concert series held on Ocean Isle Beach at the Museum of Coastal Carolina parking lot each Friday night starting at 6:30.  That series will wind up for the year on August 31st. 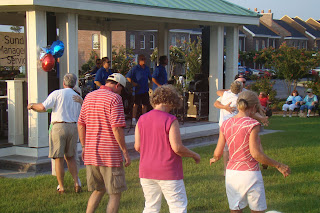